Начало Новини We are sending the Chiprovtsi carpets in UNESCO
Новини

We are sending the Chiprovtsi carpets in UNESCO 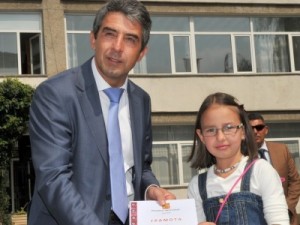 Chiprovtsi. Our country will propose the hand-woven Chiprovtsi carpets to become part of UNESCO’s World Cultural Heritage. This was said by the President Rosen Plevneliev at the celebrations of the 400 years from the birth of Petar Parchevich in Chiprovtsi.

The Chiprovtsi carpets are part of Standart Daily’s campaign for the Miracles of Bulgaria. It aims to sort out the cultural monuments and traditions that would become part of the UNESCO’s World Heritage. The Chiprovtsi carpets are now second in the “intangible cultural treasures” category. Before them the readers have ranked only the puppets made of dry leaves from Plovdiv.

We hope that with the support of the national programme “Bulgaria 2020” the north-west regions of our country will catch up with the other regions in economic development, said Plevneliev. He added that his cause is the modernization and prosperity of Bulgaria.

The President saw the historical museum of the city and the primary school “Petar Parchevich” where exhibition is arranged of the lineage of this great Bulgarian. He visited the carpet workshop of the school and awarded prizes to children, who won the competition for an essay, a poem and painting dedicated to Petar Parchevich.

The President met and had a talk with survivors of the Parchevich family – Count Laslo Peyachevich, Countess Anna Maria Peyachevich and their daughter Tatiana Peyachevich who came for the celebrations from Vienna, where they live.

The sun in Vidin rises from the North