Northwestern Bulgarian gives CSKA some of its best-loved players

Undoubtedly, football is the most loved sport in Bulgaria, and CSKA is one of the two clubs with the most numerous fans.  Actually,there is hardly a family that doesn’t get excited by the situation and performance of the Army team – some have enjoyed their success, others enjoy their losses. Some argue that “Levski” is “the team of the people”, other claim that the ratio between the fans of the two major football clubs is equal everywhere in Bularia.  Northwestern Bulgaria, however, is a slightly different case. Vidin, Vratsa, and Montana have been recognized for the “red” bastions for years, and the love for CSKA is often stronger than the support to their local teams. The critics would say that it is unworthy not to support your local team and instead support a club from another town, be it a national ace.  However, when discussing the attitude of the football fans from Northwestern Bulgaria to CSKA, the situation is really slightly different. Because in some periods of the history of the Sofia club, players from Vratsa and Montana or players who had started their career in the local football teams were the big stars of the team, and this added to the self-esteem of the regional fans and was an additional stimulus to “cry their heads off” for the army boys.

Only God knows whether the history of CSKA would have had those golden pages from the late 80s, if the goals hadn’t been kept by Ilia Valov. The goalkeeper, born in Knezha, has been playing for “Botev” Vratsa in the period 1981-1988, and with his performance in the 180 matches for the Club became one of the legends for the local Vratsa people. But the tip of his career was the period 1988-1990, when he kept the goals for CSKA. Valov won all trophies – Champion (1989 and 1990), the Cup of the Republic of Bulgaria (1989), the Cup of the Soviet Army (1989 and 1990), and the Superbowl (1989). However, what will forever remain in the hearts of the CSKA fans are his game-savings in the return match of the 1/4 final Winner’s Cup Championship against the Dutch “Roda” team.  In the regular time and in the extratime, Valov discouraged the attacks of the host with his incredible intrusions, and then managed to save four penalty kicks and sent CSKA to the semifinals against “Barcelona”.  So, when we discuss the generation of Stoichkov, Penev and Kostadinov, we should definitely mention the name of Iliya Valov, who greatly contributed to the glorious sucess of CSKA by the end of the 1980s.

Tsetso Yonchev on the wing

“Tsetso Yonchev on the wing, shoots and his name is on the signal board – a second goal for CSKA” the red fans sing to the honor of the rapid CSKA attacker from the middle of the 70s to mid 80s.  Tsvetan Yonchev was born in Vratsa and started his career in the local “Botev” football team. Yonchev recorded a total of 234 matches and 54 goals for CSKA.  A Bulgarian champion (1976, 1980, 1981, 1982, 1983), winner of Bulgarian Cup (1981 and 1983). His moment of glory, similar to Valov’s, was during the European Club Tournaments – he became a semifinalist for the European Champions’ Cup in 1982 when he scored two goals against “Bayern Munich” with a 4:3 in Sofia.

These are probably two of the most iconic figures in the golden teams of CSKA. Over the years, a strong presence among the “red players” was felt by another bunch of players originally from Northwestern Bulgaria or gone there from the local clubs. The couragous left back Valentin Naidenov (born in Berkovitsa, playing for “Botev” Vratsa “) – all would remember his best performance on the terrain and his masterpiece goal against “Atletico Madrid” on the “Bulgarian army” stadium. The younger generation will always remember the spectacular spin of the adolescent from “Botev Vratsa” and a former player of “Montana” Genadi Simeonov after his goal against “Newcastle” for 2:2 at St. James Park. Iliya Voynov, also known as the “Prince of Vratsa, also left memorable games with team CSKA. This makes the guy from Vratsa – a typical number 9 Valentin Stanchev at the end of the 90s and the beginning of the 21 st century.  The stars of the Bulgarian football Martin Petrov and Stiliyan Petrov also appeared in CSKA after they were noticed for their spectacular play in “Botev” Vratsa and “Montana” respectively.  Vidin has also given some of the best football players (until recently, some coaches, too) to CSKA – the two backs Rosen Kirilov and Milen Radukanov.  The CSKA captain currently is Valentin Iliev – the son of Iliya Valov and another player, with whom the football fans from Vratsa are especially proud up to these days.

With so many legendary players who made not only the CSKA fans but all Bulgarians prickle with pride, it seems somewhat logical that the Northwest emphatize with CSKA.  Of course, the local teams have also enjoyed their fan’s support, and other Sofia teams (mostly “Levski”) have also been greatly supported by Vidin, Montana and Vratsa regions through the years. But here the “red” ones are specially respected.  The proof is the numerous fan clubs of CSKA – in almost all cities of the three Northwest districts. 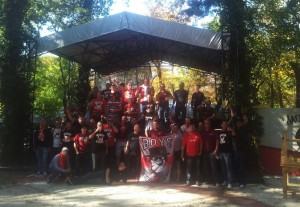 Over the years, columns of vehicles heading for the Borisova garden in Sofia formed for every important match of CSKA on the main highway E-79 and on Hemus motorway. With the development of the Ultras culture in Bulgaria from the end of the 90s and the beginning of the new century, some groups following this model to support their teams developed in Vidin, Vratsa and Montana.  Particularly active in this regard are the boys from Boys Vidin – the engine of the sector “G”. The organization was officially founded in 2001, but most of its members were CSKA fans long before and followed their team everywhere in Bulgaria and Europe. In the recent years, the Ultras faction from Vidin evolved rapidly – the boys created a new logo for the organization, they developed their own line of items – t-shirts, sweat-shirts, stickers, and their flag was invariably the most conspicuous on the fence (a sign of respect in the sector). Several works of graffitti, impressive with their design and CSKA and patriotic slogans, painted in some visible places in the town near Danube, inspire the young fans of CSKA and win the respect of the elderly ones.

With their constant presence at the matches of the team, regardless of the location, and remarkable for the loyalty in the sector and beyond – Boys Vidin earn the respect of all CSKA fans, as well as the respect of the other teams in Bulgaria.  Because they can definitely serve as an example of how to support your favorite team and how to defend the Red honor of the Northwest.