Vidin municipality governor was at Kula for Europe day celebrations 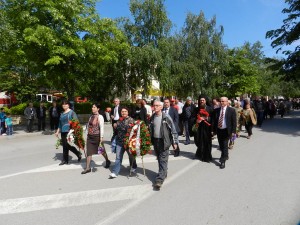 Dozens of citizens and guests passes through the town central  street to the monument of died Russian soldiers .In memory of the heroes of World War II were hold a memorial service by archimandrite Policarp from Vidin’s holy bishopric.  With wreaths and flowers, ahead of memorial were bowed the governor eng.  Krustio Spasov , the mayor of Kula municipality  d-r Vladimir Vladimirov, representatives of municipality council, BSP regional and municipal organization,  veterans and citizens. The flowers were laid and at the plaques of perished American fliers and wars participators from Kula region.

The memorial procession continued to “Katyusha” memorial complex near town of Kula, where traditionally is the celebration culmination, dedicated to the Europe day and Victory day. The monument was opened on 9 of May 1975 at the place where in autumn of 1944 were placed the fire positions of Russian Katyusha rocket launchers.

“For us this is a holy place, because just here on the territory of our country were waged military actions between Soviet army and the retreated German  units” said before “Katyusha” the chairman of Veterans-socialist’s club Emil Dichev. In an emotional speech, he reminded heroic moments of the battles waged on the Serbo-Bulgarian border in September 1944. “In the battles near town of Kula died 67 red army’s and 19 Bulgarian soldiers and volunteers. Do not to forget their names!”, invocated Emil Dichev.