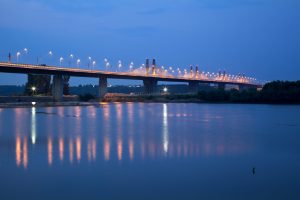 Passenger trains between Vidin and Calafat will run on the second bridge above Danube from 10 of May, announced Ministry of transport. This is happening almost a year after the construction is released for exploitation between the both cities.

Built by now railway line has been used just once as a trial at the opening of Danube bridge II on 14 June 2013. According the calculations the line had built in a way the trains can reach speed of 160 km/h.

In Anton Ginev words, the reason movement were not allowed by now is lack of electricity at about 100m from railway line on the Romanian territory. To use it in that way there was a need the trains to have electric and diesel engine, which is expensive. It is not still clear if this problem had already sold.

The other problem connected to the equipment ownership. Until recently, the bridge was totally Bulgarian ownership.

The building of Danube bridge II cost to Bulgaria 225 million euro, from which 60 million euro were from state budget and the rest from ISPA programme and loans. Romania participates with 48 million own and European resources.

Friends of Belogradchik and region beautiful nature will take a meeting in Sofia.