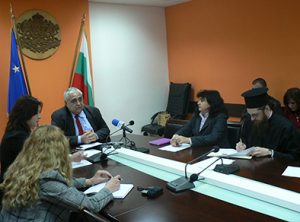 On January 11th, 2013 the Tourism Advisory Committee for Vidin District held its first session for the year. The session was chaired by Eng. Lyubomir Nizamov acting as Deputy District Governor.

The committee members discussed the joint participation of the Municipal Offices of the district in the Vacation Expo 2013 International Tourism Fair, which will be held in Sofia within the period of 14th to 16th of February, 2013.

On or before January 14th, 2013 the ones willing to participate in the exhibition should notify Mr. Evtim Stefanov, Executive Director of the Regional Development Agency and Business Centre about the extent of their financial participation with respect to the booking of an exhibition stand, announced the officials from the District Governor’s Office.

At the end of the session the project entitled TRANSDANUBE – Sustainable Transport and Tourism along the Danube River, in which Vidin’s District Administration is a partner.

The project is implemented under the South-east Europe Transnational Cooperation Programme 2007-2013. Among the project’s main goals is the development of sustainable mobility along the Danube River, including the use of railway, road, bicycle and sea transport for the purpose of improving the access and alleviating the tourism throughout the entire Danube region.