THE FIRST EUROPEAN CAME FROM BELOGRADCHIK

Where did the first European come from? When did a human set foot on the old continent for the first time? Could Bulgaria turn out to be the bridge along which Homo genus passed from Africa to Europe? The sensational discoveries made in Kozarnika cave near Belogradchik have challenged the theories of French and Bulgarian archaeologists. Before the cave was explored, the archaeologists thought that the pre-European passed from Africa to Europe at Gibraltar. There are artifacts proving this found in Spain – age 800 000 years, in Turkey – 400 000 years, in France and Croatia as well. In 1996, the French archaeologists found proofs of man living in Kozarnika cave dated 1.6-1.4 million years.

The scientists entered the Kozarnika Cave not by accident. In the early 1933 the archeologist Rafail Popov gave detailed reports about the cave. According to him, people lived in this cave from the time of the Stone Age. Since 1996, each summer the Bulgarian team led by Senior Research Associate Nikolay Sirakov from the Archeological Institute at the Bulgarian Academy of Sciences, together with a French team led by Jan-Luke Gaudily from the Institute for Geology, Prehistory of the Quaternary period in Bordeaux started researching the paleontology and the geology of the cave. What discovery has caused the interest in this cave? A tooth from the Homo genus – probably Homo Erectus, as well as animal bones with notches on them. Undoubtedly, these notches were made on purpose, not by chance when the meat was removed from the bone.

This is indicative of thinking in symbols, which was not typical of humans, some 1, 6 million years ago. Such thinking was found to exist in Homo Sapiens, 50,000 years ago. This has been a matter of dispute among scientists and is still a mystery. 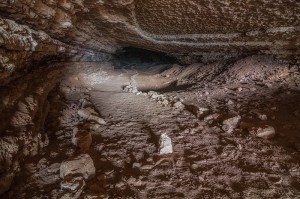 A Bulgarian-French expedition started exploring the final phase of the late Paleolithic period. There are 18 cultural and 16 geological layers in the cave, with the most significant ones being the lowest layers. These reveal a late Paleolithic culture of 37-34 centuries B.C. The finds about human activity of so many years ago on this spot have altered the theory of the human migration from Africa to Europe. Gibraltar is no longer an option with the Bosphorus becoming stronger as such. The Danube was crossed via the Iron Gates gorge. It is the most natural route of prehistoric man who found himself in the Kozarnika cave, the French archeologist Jan-Luke Gaudily thinks. Whether people dwelled there permanently or came there just for feasting after hunting in the region that was rich in game, history hasn’t yet provided a decent answer.

The excavations are still on. The archeologists have found animal bones and skeletons from extinct animals such as lions, panthers, horses, and cave hyena. They have also found farming implements and weapons made of flint and bone. Each archeological season the archeologists explore at least 50cm. of the earth layer but they are more interested in over 7m. This is the reason why the excavation works will continue this summer as well.

The cave used to be mushroom cellar.

Local people know this cave under the name of Suhi Pech. Years ago, goat herders used it to shelter their goat herds there and that’s how the cave got its name. It also used to be a mushroom cellar as people used to grow mushrooms inside. It was once even a nuclear-bomb shelter…

Kozarnika is not the only cave in the Karst region of Belogradchik. There are 28 more caves which have not been explored yet. Apart from the Magura Cave at Rabisha village, the rest of the caves are not developed. There is not lightning inside, that’s why people enter only with special lamps. The most beautiful of all caves is Venetsa (the Wreath) which is also the easiest to access. You don’t need any special equipment to enter this cave, nor even a guide. It is 220 meters long. Its formations are enchanting – colorful stalactites and stalagmites.

In this same region is the Bashovishki pech cave, which is 1289 meters long. There is a river running in this cave which overflows in the spring and floods the railroad nearby. There is a dyke in the cave built to protect the railway from inundation. The cave has two galleries accessible by boat. An interesting fact is that a peculiar insect nowhere to be found inhabits this cave. Because Petar Beron used to research the cave fauna, the insect was named after him – “Beronikus”.

Near the Kozarnika Cave is the Mirizlivka Cave. Years ago these two used to be one cave but some sinking had probably caused rearrangement of the earth’s layers, thus forming two caves with opposite entrances. There is a high risk of landslides in Mirizlikva cave due to the extraction of thousands of tons of stones through blasting for the needs of construction industry

Through the Bridge onto the European Road System