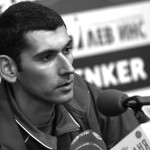 Alexander Popov is a CEO of CSKA volleyball club and a longtime coach of the male team. In 1983, he started practicing volleyball in CSKA sports club, and, in 1989 he was already playing in the men’s team. With his first participation with the men’s team, Popov became a holder of the champion title of Bulgaria.  In 1990, together with the team of CSKA, he participated in the final four of KESH. In 1995, at 24 he gave up his career because of the many injuries he had. Three years later, Alexander Popov was already the coach of the CSKA men’s team. In his career as a player he won five championship titles of Bulgaria and three as a coach.

Mr. Popov, tell us more about the condition in which CSKA volleyball club is now.

Two years ago, we were members of the Champions League for four consecutive years. We had high goals, we had a person supporting us and that was a guaranteed that we would participate in this prestigious event. In 2011, we managed to win the maximum achievement for a Bulgarian team, namely the Champions’ Cup,the Cup of Bulgaria and the semi-finals of the Cup of Europe. Such a thing had not happened for thirty years. Today, such a success is unthinkable for the football, basketball and volleyball clubs in our country. The paradox in this whole situation is that because of the high sport goals that were set and fulfilled, we are still paying our debts.

What do you mean?

The former president of CSKA Volleyball Club left us for a number of reasons and we were left with a huge debt to the players and to the institutions. This was in the summer of 2011.  We had two options. One was to declare bankruptcy, this was an economically correct decision having in mind the accumulated debt to players, creditors, and to the state.  The other option was to fight in some new, unknown way. Unfortunately in this heavy economic situation, sponsors and advertisers are neither interested in sports or art and science.

What did you do in this situation?

I managed to meet politicians and businessmen and tell them about our problems, but unfortunately, the club received little support for these three years. The good thing about the whole situation is that CSKA Volleyball Club managed to preserve its structure – the men ‘s, the women’s teams, and the all the junior school clubs. We have twelve teams in the youth volleyball club with over 250 children. The success we boast of is that despite the serious financial situation, we managed to preserve the basis upon which we can build new sporting achievements.

After we didn’t receive external funding, I was forced to look for other methods.  Last year we launched the initiative “100 hearts for CSKA” directed towards our fans to help us financially. The results were good. With 50 thousand levs collected, we managed to pay our bills and provide for our sports activities so that CSKA could take part in the competitions.

After the last year campaign “100 hearts” we already know that this was a successful model. Hundreds of CSKA fans supported us as for them we were not just boys and girls who threw the ball over a net. We created one big family with the campaign “100 hearts” and our fans. CSKA supporters live as one organism with us. Last year they participated in the financing of our sports activity. Unfortunately after the end of the campaign, I had to seek some further help from some companies, but in return I received only promises.  That was the reason why I continued with the innovative methods of financing.

Again under the slogan “100 hearts for CSKA”, we started a new initiative which allowed us to negotiate discounts with over 50 commercial companies. This discount is generated in one card which every fan can buy for 50 levs.  The amount paid is the only profit for the Club. All discounts negotiated by volleyball club CSKA go directly to the users of the card.

Indeed for a couple of months and without absolutely no external funding, we were able to do this project. The sale of the cards is now underway. We did the ad campaign and I am proud to state that our product is competitive enough to provide fresh funds for our sports activity.

Can we expect expansion of the campaign in another direction?

This is what we plan. As you already know, the whole initiative has two directions and is expected to be further expanded. We have ideas to develop our own trade brands to enter the market. We are planning to gather in one place all the participants in the campaign “100 hearts for CSKA” who somehow helped us – some with discounts, some with money, third with advice or a good word. We shall gather them all in one place to get to know each other and possibly establish business relationships. We shall be the mediators in this process. We are planning some more initiatives, but for now I prefer to keep them secret.

A few weeks ago, the team became a victim of theft from the changing room immediately before your match with Neftochimic. In an interview on this occasion you mentioned that the players haven’t received their salaries for three years.

Yes, someone has stolen a couple of sport shoes but it couldn’t stop us.  We won over Neftohimic despite this unpleasant incident. Otherwise, the players in the club haven’t received their salaries for 38 months and here I’m not just talking about the male team. The situation is the same for the female volleyball players, for the coaches and the people working in the administration. All the money coming to the club from the campaign “100 hearts for CSKA” are used to pay for the sports activity, or put in another way, we use this money so that the Club can go to a competition, or we can pay our bills or we can pay the judges who come to judge, etc.  As for salaries and advances…this has been terra incognita for a long time at CSKA.

Many will be surprised by your stoicism.

Surely! By the way, this is one more thing that we can be proud of. Unfortunately in Bulgaria we are starting being proud of the terrible things we have to endure, but that’s real life.

Indeed in the first year when we had no external funding and no salaries, we were ashamed to admit it. Because the thought of CSKA to remain without any money is incomprehensible to most people. I’ve been asking this questions dozens of times “How is it possible not to have money for CSKA? So, there’s something wrong!”. We have been searching for all kinds of financing, have held numerous conversations but the situation remained the same. Money is scarce not only for volleyball, such is the situation in the whole country.

That’s how, for a year we managed to hide our shame that we were left without any money. And from one moment onwards what the players, the coaches and the people from the Club did is pure heroism.

I’d like your readers imagine the situation just as I depicted it. Are they going to keeping playing for honor only or for some similar values in the second month or after half a year without payment? Yet, to my great satisfaction, there are people around me who had a cause and who managed somehow to endure this absurd situation and continue to fight.

In addition to the difficult financial position of volleyball club CSKA, the problem with sports facilities of the Club still remain unresolved. How is this issue at present?

The issue of CSKA sports facilities has been presented to the attention of the Ministers of Sports from at least three governments back. The current Minister Mariana Georgieva, even with her best wishes, cannot resolve this issue. We want only one thing from CSKA, all sports clubs in boxing, wrestling, volleyball, etc from the countryside and from Sofia to be treated equally. It’s impossible for the club that brought the greatest glory to Bulgaria be put in such a deplorable situation. I know that the Levski fans have their own explanation about this but that’s the truth. Currently, we are in absolute disadvantage regarding the rest of our competitors in Bulgaria and that’s pure demagogy, to put it mildly.

The sports facilities where Tanya Bogomilova, Kubrat Pulev and a number of famous volleyball players and other great athletes are in deplorable conditions. These facilities are not provided to CSKA athletes. On the other hand the problems of “Levski”,”Slavia” and the clubs from the countryside have long been resolved. This is an example of bad policy. I hope the authorities should heed our words. I’ts impossible for the team of CSKA, the club of CSKA be in a more difficult position than the others. That’s simply crazy.

How can you explain this difference? Do you find any bias in this respect?

There are people who think so. I’m not looking for bias or inclination. I can only explain this with bad political solutions in the sport sector. It’s impossible that things go on with this burden.  By the way, the sports facilities go on crumbling because of this abandonment. We want these sports facilities to be provided for the sports club for free. If anyone doubts that athletes of CSKA can make national sport – that’s another topic.  But why the CSKA situation is harder than the sports situation in Kaspichan, for example.  Someone should answer this question!

Everyone knows that the spectators are the ones who direct the interest of the sponsors and money in the sport. Why in Bulgaria only the matches of the national volleyball team are honored while the club’s meetings are less frequented?

This doesn’t surprise me, either. The mentality of the Bulgarians is to follow the winners.  When the national volleyball team scores points and shows good results, this instantly creates fans. I will give you one more issue.  In 2011, the team of CSKA played at the semi-final for the European Cup. At that time, the sports hall in Samokov, which can take more than 3,000 people, was already full in 2 p.m. and the match had to start in 7 p.m. So, if we had been playing in Arena Armeets, 12 thousand people would have attended the match of a club team. At that time our team was not strong enough but we were yet competing against European volleyball aces and the audience appreciated the results achieved.

Unfortunately, when teams lack the opportunity to compete at a high level, the interest on part of the audience decreases. Here we make an exception because the teams of Levski and CSKA have always had “steadfast electorate” in the face of their loyal audience. More than a week age we came back from a match in Dobrich where we were supported by our fans from Dobrich and Varna and the region.  This thing must be imitated and encouraged.

The coach Alexander Popov with the men’s volleyball team of CSKA, 2013.

Antim I – The Unifier