Начало Новини What secrets does the Kozarnika Cave hide?
Новини

What secrets does the Kozarnika Cave hide?

One of the most interesting caves in the region for archaeologists, the Kozarnika Cave, continues to be the focus of studies for 16 years in a row. The archaeological studies began in the late 90s of the 20th century.  It became clear from the very first excavations that the findings were sensational – traces of human presence dating back 1.4 million years ago were discovered. These discoveries marked the earliest human presence in Europe and showed that the settlement of people in the European continent has probably started in the Balkans. 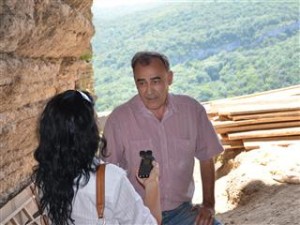 The archaeological excavations in the cave started in 1996 and were organized by the Archaeological Institute with the Bulgarian Academy of Sciences and the Institute of Geology and Prehistory of the Quaternary in Bordeaux, France, headed by Nikolay Sirakov and Jean-Luc Guadelli. We met assoc. prof. Nikolay Sirakov while working on the site.

“Field studies are carried out here every year in which students from Bulgaria and France also participate. This is a very interesting site of global significance. Here we have found traces in the lowest layers, which date back within 1.4- 1.6 million years ago. These are the traces of the first human beings who settled in Europe on their way from Africa. Such early sites have never been found anywhere in Europe. Our studies allow us to discover details of their dwellings, for which they usually used the caves. They inhabited caves because they still didn’t know how to build lodgings. Our findings consist of two types mainly: remains of bones from their hunting prey, taking into account that sometimes these people fed with carcass in case the hunting failed, and also remains of their flint stone tools. This was the era when pottery, coins, statuettes or written scripts did not yet exist; we are talking about the prehistoric man. We are learning about the organization and the first rudiments of social organization within the groups. We are studying the remains of their hunting prey consisting of hyenas, lions, panthers, antelopes and horses, all of which suggests a climate similar to the one in North Africa”- said the archaeologist. 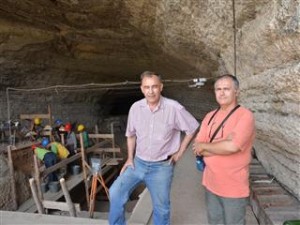 The deepest drilling studied is 9.5 m deep and this is where the earliest layers are located. Currently the layers of the late Paleolithic era are being excavated. Remains of the camp of Homo sapiens were found, i.e. of humans like us but living 19,000 or 18,000 before the Thracians lived. Here like in many other archaeological sites evidence of treasure-hunters’ encroachment were found, who have dug a deep pit in the heart of the cave: When we came here in 2004 we found a deep pit excavated by treasure hunters. We used the pit and shaped it as a drilling so we collected data from this place too. Nowadays treasure hunters also trespass. Speleologists have entered the cave in the autumn and in the spring and have tried to clear a path within a crack in the rock. The interest in bone remains from cave bears and other cave inhabitants of the ancient times has increased in the recent years. But these violations are very difficult to fight with” – added assoc. prof. Sirakov. 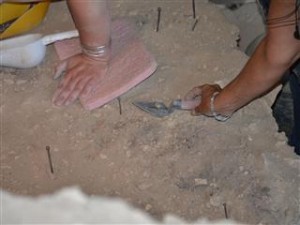 According to Jean-Luc Guadelli – the Director of the team of archaeologists from the French National Centre for Scientific Research, since Bulgaria is located in Eastern Europe it was one of the most natural routes, where the prehistoric man could have passed on its way to Europe. We have cooperated for almost 30 years, we have worked together also on another site – the Temnata Dupka Cave (Dark Hole) in the region of Karlukovo. We were lucky to find there remains of human beings from the Early Pleistocene (editor’s note – before about 1.8 million years), which are one of the first in Europe dated back so early. Here we have traced not only the appearance of first humans but their evolution also. We have also observed the migration of different animal species. We have dated our findings with a relative precision – plus minus 50,000 years, mainly on the basis of the fauna. By cooperating with the Institute of Physics in Bordeaux we are trying to use different physical methods to ascertain the time periods with more accurate precision.”

Both archaeologists are confident that the joint cooperation between Bulgaria and France in this field will continue. The archaeological expedition will stay in the Kozarnika Cave till the end of July. After the excavations end, the municipal authorities of Dimovo, on which territory the cave is located, have decided to develop a project for tourist attraction. Kostadin Philipov, the Mayor of Oreshets Village also confirmed this idea.