BELOGRADCHIK AND VIDIN ARE PART OF TWO TOURIST ROUTES

The Deputy Mayor of Belogradchik took part in two international conferences on board a ship – the Regional conference for territorial cooperation and European cultural routes in the middle and lower Danube. 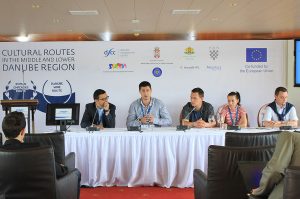 From 27th May to 3rd June, the deputy mayor of the municipality of Belogradchik, Rosen Mladenov, participated in an ‘on board a ship’ Regional conference for territorial cooperation and European cultural routes in the middle and lower Danube: “Following the route of Roman emperors” and “On the road of wine”. The participants in the conference sailed on the Danube on board a passenger ship from Vidin to Bratislava.

The Regional conference for territorial cooperation presented good practices in relation to the establishment of EGTC (unions for territorial cooperation) as instruments for strengthening cross-border cooperation in various areas of social, economic and cultural exchange between the countries located along the Danube. There were representatives of local and central authorities, and of non-government organizations from the Danube countries.

Delegations from Bulgaria, Romania, Serbia and Croatia took part in the conference European Cultural Routes along the middle and lower Danube: “Following the route of Roman emperors” and “On the road of wine”. Each country presented sites on its territory located by the river Danube in relation to the two conference routes. At the conference discussion, the two routes were defined with Belogradchik‘s participation with the “Kaleto” fortress and “Magurata” and “Borovitsa” wineries. A member of the Bulgarian delegation suggested that Vidin be also included in the routes, thus allowing for a longer stay of tourists on the territories of the municipalities of Belogradchik and Vidin. Contacts with tour operator companies from Bulgaria, Romania, Serbia and Croatia were established during the conference.

THE BRIDGE OF THE SINKING HOPES