For the ninth year running students from the Geography Faculty of the Lomonosov Moscow State University are guests of Belogradchik Municipality. As is well-known, they undergo a 14-day training practice at the town beneath the rocks and work jointly with the Municipality staff under a project to award a geopark status under UNESCO’s aegis, which would span beyond the area of Belogradchik Rocks.

Throughout all these years, huge exploration, collection, and research work took place, supported by actual practical outcomes. These and other matters relating to future joint activities were discussed with the mayor Boris Nikolov at a meeting held in his office. 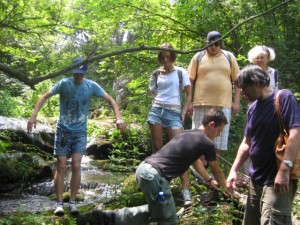 In the fall of 2012, two independent UNESCO experts visited Belogradchik Municipality to learn the overall information relating to the geopark issue. After their 3-day visit and viewing of all natural phenomena, they shared their opinion that the new geopark would appear much more attractive if the Magura cave were added to the territory of Belogradchik Rocks. This is why according Prof. Natalia Nikolaevna and Nikolay Mihailovich – scientific leaders of the students, the most important thing currently is to have cartographic coverage of the entire territory, which will be 20 times larger than the initially projected one. After several meetings of the Russion scientists with Prof. Dimitar Sinyovski, Chair of the department of Geology and Geoinformartics at the University of Mining and Geology, who has also studied in depth the natural phenomena in this region, new ideas have sprung up as well. Apart from the group Zbegove and Borov Kamak near Borovitsa, the new landscape map prepared by the students will also include some of the geomorphological and geological formations in neighboring municipalities. 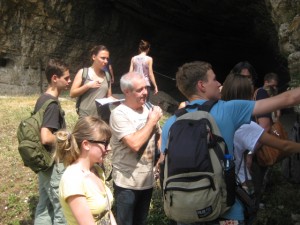 Prof. Dimitar Sinyovski with the students

Apart from working on this cardinal issue during this year’s practice, the Moscow students also got feedback from tourists and guests of the town on matters relating to advertising and diversification in the tourism trade.

More information relating to the management, structuring, and future governance of the geopark and the tourist infrastructure is also required. It is necessary to carry out mapping and precise identification of the existing geopaths. Help in this regard will be provided by the students from the University of Mining and Geology, who will also hold academic practice in Belogradchik under the leadership of their scientific leader Prof. Sinyovski.

Another crucial issue is to collect the required information and prepare the required documentation for the new nomination, have it translated into English and file it with the European Network of Geoparks between October 1 and December 1 of this year. 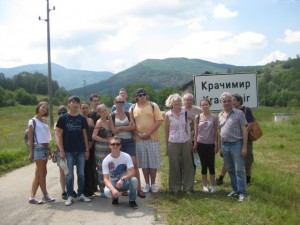 During their practice the Russian guests visited the Belogradchik fortress, the Magura cave, and several picturesque locations, such as the Krachimir village. They made a short walk-around there. According to Prof. Sinyovski, the Vreloto karst well, which is located near the village, will be one of the 50 geotypes, which will comprise the future geopark. During the penultimate day of their stay, the guests will visit the district center Vidin and see its places of interest.