The Synagogue of Vidin

The Vidin’s Synagogue was built in 1894 at the place of a previous church destroyed during the Russo-Turkish War (1877-1878). The construction was carried out mainly with donations from the local Jewish community. Vidin’s Synagogue is the second largest after the synagogue in Sofia.

The temple is located near the fortress Baba Vida. In terms of architectural design it is a completely symmetrical building with proper forms; it is of the triple nave single apse type basilica with a narthex, galleries and four towers. The internal dimensions of the prayer hall are 21 x 10 meters. It was built as an analogical model of the synagogue in Budapest. The altar coloured in blue, red and bronze is the work of the Czech sculptor Max Verih, who at that time worked and tutored in Vidin. The wooden material was delivered from Romania and Hungary, and the majority of the furniture was ordered from Austria.
The interior is impressive for its colourful and rich ornamentation. The altar was placed on a platform in the apse. It is assumed that it mimics the architecture of the ancient Jewish temples with a central part, arches, columns and two towers. Above the altar a symbol of the sun is featured.

The main facade has once been truly impressive. It was built with a black protruded portion and two lateral towers. The central entrance is arched with a semicircular arch over a couple of columns with high pedestals. A round window with iron bars braided in the form of the Star of David graced the centre of the arcade. The four lateral towers with arched windows, gathered in pairs had stained glass and fine decorative lattice.

At the entrance of the temple two plates of white marble were installed, on which the Hebrew names of the Vidin Jews who gave their lives for the freedom of Bulgaria were inscribed – from the volunteers in the Russo-Turkish war to the soldiers who died in World War I.

Unfortunately, in the middle of the XX century the synagogue lost its religious function. In 1948 1,200 of Vidin’s Jews departed for the new state of Israel and the synagogue was transferred to and under the management of VidinMunicipality. In 1950 this temple of prayer was turned into a warehouse and gradually the magnificent building lost its brilliance. In 1986, on the recommendation of and with funding from the then Culture Committee the restoration of the temple started, which is now designated as a cultural monument. Because of the wonderful acoustics of the building the citizens of Vidin intended to use it for the live performance of symphonic concerts. In 1991 the repairs were stopped, and the property was returned to the sparser Jewish community in the town.

Today the Vidin’s Synagogue is still in poor condition, but fortunately funds for its restoration have been found. We expect that soon the temple will restore its glamour of the past. 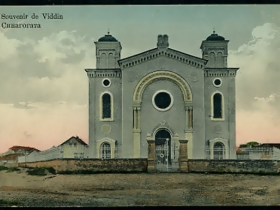