This year 37 folk teams among which some individual performers took part in the festival. The participants come from 22 villages from the regions of Vidin, Vratsa and Montana, and also from Veliki izvor village, Serbia. It was 458 people who took part in the fest. Gladly, the interest of the people in the fest is still strong despite the challenges of time. It means that we still need our folklore alive inside our hearts, since it is an expression of the originality of the Bulgarian spirit. It is our traditions and rites, songs and dances that have preserved us as a nation.

All day long, the central square of Belogradchik resounded with the most popular Bulgarian folk songs and dances. The participants presented authentic folklore and improvisations. The hosts had the honor to be among the first to take part in the Bulgarian Folklore Celebration with the participation of dance formation “Kalina” at the Youth Cultural Centre. The two dance formations from the Folk Dance School at the Children’s Complex and the cultural clubs in Stakevtsi and Salash villages gave very good presentation of authentic folklore as well. All folklore bands were great – participants from the villages Boinitsa, Georgi Damyanovo, Rasovo, Tarnyane, Ostrov, Dolni Lom, Tzarevets, Zamfir and Brusen. Most of the performers demonstrated polyphonic singing. Great impression was made by the youth vocal bands from Oryahovo and Vinarovo. 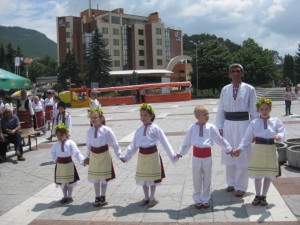 The performance of all dance teams was fascinating , too: the Folk studio “Severniatsi” from Vidin at “Smile with us “Cooperation, the bands “Fidanki” from Vidin, the groups from the Youth Culture Centre and the Children’s Complex from Belogradchik, from the villages Vinarovo, Boychinovtsi, Boynitsa and the authentic folk dance group from Oriahovo.

The audience heartily appreciated the shows of the kids from Negovantsi, Vinarovo, Oryahovo, and especially the performance of vocal studio “Severniacheta (Kids from the North) with artistic director Erik Petrov featuring the charming 5-year old Victoria, Denitsa and Martin. The audience was very much impressed by the fashion show of old national costumes dating back more than 130 years ago. The show was organized by community culture centre “Nadezhda – 1903” – Boynitsa.

The folk festival finished with a concert by the folk ensemble from “Georgi Genchich” cultural club – Veliki izvor village, Serbia with art director Novitsa Vatovich. The guests from our Western neighbor performed songs and dances from the regions of Leskovac, Nish and Wallachia.

The organizers from the municipality would like to thank all participants for their excellent performance at the festival and wish them all the best in their future work.

The folk festival passed under the patronage of the mayor of the municipality Boris Nikolov. The major sponsor of the event was “Victoria “Insurance Company. Next year, the festival is expected to be held in the second week of June.

Tunnels and Count Dracula – the mysteries of “Baba Vida”