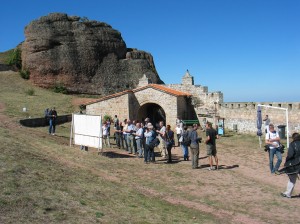 Journalists and tour operators from Belgium, the Netherlands, Germany and Italy, as well as representatives from the Ministry of Economy and Energy and from the Danube Competent Center visited Belogradchik yesterday. The goal of the 23 foreign guests was to get acquainted with the sightseeings with which the city has been included in the two new tourist routes: “On the road of the Roman emperors” and the “Wine Road”. The project costing 180,000 euros is financed by the European Commission within the “Competitiveness and Innovation Framework Programme”. Among the partners are the Ministry of Economy, Energy and Tourism (Bulgaria), the National Tourism Organization (Serbia), the Ministry of Economics (Serbia), Association for Cultural Heritage “Mioritics” (Romania) and the National Chamber of Commerce (Croatia). The guests visited the Magura cave where they were introduced to the history and the unique murals, as well as to the possibilities for fishing tourism at the Rabisha lake.  After that, they were invited to lunch by the mayor of the Municipality of Belogradchik Boris Nikolov to the “Kaleto” fortress.  Dressed in Roman robes, boys and girls from the Children’s Complex and students from “Hristo Botev” High School created warm and authentic atmosphere. The Deputy Mayor Rosen Mladenov gifted each of the visitors with packages with promotional materials and information leaflets on the two routes. The guests also received a small pebble from the rocks wrapped and signed “A gift from the children of Belogradchik – a fraction of the eternal rocks”.  After the tour of the castle the guests tried the homemade pie called “banitsa”. Then they mounted the bikes provided by “Skala” ( the Rock) bicycle club with which they arrived at “Borovitsa” winery for wine tasting of some local wines.  The tour of the local attractions ended in “Madonna” Inn, Falkovets village. During their stay there, the guests watched two promotional films about Belogradchik and its Roman history.

The route “The road of the Roman emperors” is a candidate for certification as a European cultural route by the European Institute of Cultural Routes. The usefulness of our inclusion in a list of such a level is recognition and of course the promotion of the area. Thus, the Belogradchik municipality appears twice in the European charts – once in 2009 as a prime tourist destination, and now as a part of the European Cultural Routes.

The guests were impressed by the unique Belogradchik rocks, the rich history of the area and the warm hospitality, commenting that there exist positive attitude and desire for tourism development. With this welcoming, we once again proved that when a municipality, private business, a cultural center and schools work together, then the results achieved are excellent.