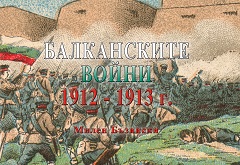 The book by Milen Buzinski is a part of his collection dedicated to history of  Bulgaria. The collection contains more than 30,000 unique documents — postcards, photographs, pictures, reports and orders, letters and telegrams, periodicals, advertising materials, autographs, etc.

Starting with the the declaration of the Independence of Bulgaria (1908), the publication traces the glorious traditions of the Serbo-Bulgarian War – 1885, the training of the Bulgarian army and its commanders in peaceful times, the life conditions in the barracks. The weaponry and the clothing of the Bulgarian soldier have been of great interest. The drills of the infantry, the cavalary units and artillery units have also been presented. A whole chapter of the book is dedicated to the Allies in the upcoming war. A couple of rare postcards show the Manifest for the Declaration of War. Another series of postcards and photographs reveal the national enthusiasm during the mobilization of the Bulgarian army and the soldiers sent to the battle front. With no claim to accurate chronology of events, the author enlists the first battle actions in Svilengrad, Kapitan Andreevo, Süleoğlu, Lozengrad. The siege of Edirne and the battles in the Rhodope mountains and in the region of the Aegean sea coast are also reflected in the book. The attacks of Pinarhisar and Chataldzha, the Truce from 1912, the Turkish prisoners and the tribute paid to the dead Bulgarian soldiers are just a part of the diversity shown by the postcards. A special place in the book, with numerous and varied material, has been devoted to the attack and the capture of the Edrine Fortress.  The Second Balkan War and the return of the troops finalizes that part of the collection.

The lights of the Christmas tree in Belogradchik are already shining.